Hitler’s Road to Power
An obscure Austrian-born corporal rose to lead the Third Reich into the most devastating conflict the world has even known. David H. Lippman

First Gamble in the East
The decision to invade Poland was one in a series of risky moves that led to World War II. Christopher Miskimon

A Fatal Attraction
Hitler’s decision to invade the Soviet Union produced disastrous results and hastened the fall of the Third Reich. Pat McTaggart

How the Holocaust Happened
The Nazi campaign of genocide against Jews and other groups in occupied Europe was an organized, systematic effort that resulted in the murders of millions. Flint Whitlock

Life and Death in the Führerbunker
The Third Reich that Hitler boasted would last a thousand years ended in a series of dismal concrete rooms deep beneath the blazing ruins of Berlin. Flint Whitlock

Hitler’s Speeches
Adolf Hitler was a master of oratory, mesmerizing crowds with words and gestures.

The Killing Squad
The Nazi Einsatzgruppen began the war’s most closely guarded operation, the annihilation of the Jews.

The Final Solution
The infamous Wannsee Conference set the “Final Solution” to the Jewish Question in motion. 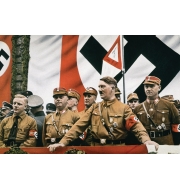